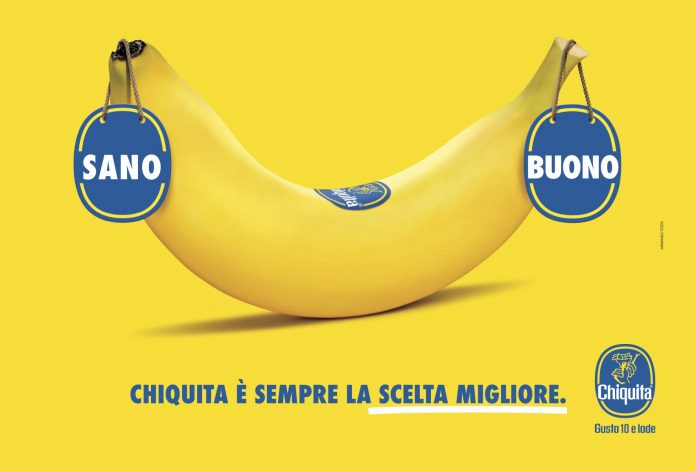 23 April 2018
Chiquita – the banana “10 e lode” – returns in communication with a large multi-channel campaign until the end of the year, signed by Armando Testa.

Chiquita returns in advertising with “Always the best choice” the new campaign that plays on the little big daily dilemmas. Developed by Armando Testa the campaign – operating since the 16th of April – will be declined on all the channels, from press and bill-posting to television, digital and on the huge out of home format in some Italian cities. It will be on air during the year also in several other European countries.

Fast food or restaurant? Workout or disco? Eating healthy or eating good? The day is full of decision to be made. But is it necessary to choose? Chiquita thinks that there’s always a third way. This is the concept that inspired the multi-subject campaign, developed to describe in a fresh, dynamic and playful way the iconic blue sticker’s banana that, with its typical smile and its ”gusto 10 e lode”, always puts everyone agree. Whatever is the choice to do in our everyday life – taking the bus or the bike, eating healthy or eating good, relaxing or doing exercises, drinking apple juice or cider etc. – Chiquita is always the best choice.

The national campaign will be regionally declined with localizations that highlight cultural specificities of the Italian Regions. An important work, made by the digital unit of Armando Testa, was also done on social networks, with particular attention to the search for the most innovative and performing formats such as Camera Effects and AR Studio of Facebook

“We come back in communication with a new campaign that once again wants to emphasize the playful and fun positioning of the brand, enhancing the elements that distinguish Chiquita: bright yellow, the unique blue sticker and the inimitable taste “10 e lode”. We wanted to develop a campaign full of verve that could live on a national and local level and that was able to reach consumers in a capillary way. Chiquita is the global brand that represents the banana par excellence and in over 100 years of history” says Barbara Galli, Global Marketing & Communication Lead of Chiquita.

“Chiquita is a brand that infects happiness, positivity and the desire to share. This is why we are proud of this project that has seen all the agency’s talents at the same table: strategic, creative, social and media “, adds Michele Mariani, Executive Creative Director of Armando Testa. “Putting together creativity and technology, media and digital is always the best choice to give brand units and more value to investments. We thank Chiquita, an iconic brand and always with a” ten and praise “in communication, for recognizing the importance and the effectiveness of our integrated approach. “

After the success of Just Smile, the maxi bill-boards campaign that have brought smiles in the last two years and have colored some of Italy’s most iconic locations in yellow, Chiquita returns with a single message to consumers all over the world.

The TV campaign includes 10” commercials with various creativities adapted to the specific positioning in TV series and programs mainly close to the Millennials target. Spots will be on air from April 23rd.

The planning is by Local Planet, the international network of independent media agencies of which Media Italia (Armando Testa Group), is one of the founding partners.

Share
Facebook
Twitter
WhatsApp
Linkedin
Email
Back
Print
Previous articleFIUGGI CHOOSES ARMANDO TESTA. HISTORY AND PRESTIGE FIND EACH OTHER.
Next articleWITH INFASIL THE MORE YOU SWEAT THE FRESHER YOU FEEL: THE NEW AD BY ARMANDO TESTA PROVES IT