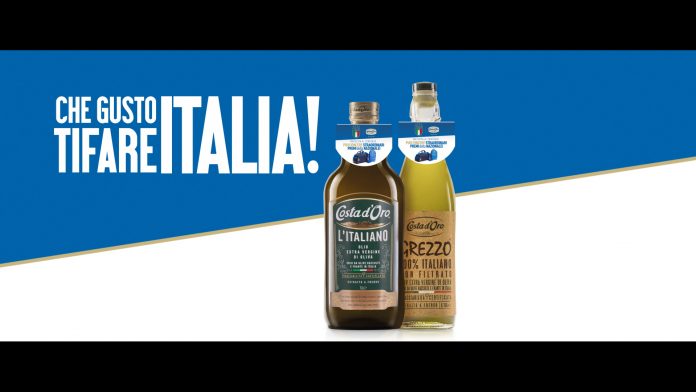 Costa d’Oro and Armando Testa, together to cheer on the national team!

The brand from Spoleto and the Turin agency team up again for the campaign for the competition “Che gusto tifare Italia!” (How tasty it is to cheer on Italia!), linked to the Italian national football team, of which Costa d’Oro is an important official sponsor.

The new commercial which is the perfect follow-up to the “Dream Team” ad of just a year ago, airs from 23 May in cuts of 15 “and 10” during the European championships.

The dream team itself is back on TV, consisting of the hundreds of people who work with passion every day to bring genuine, traceable and special extra virgin olive oils to our tables.

Costa d’Oro is giving away special prizes, which are featured in the second part of the commercial: official holdalls, backpacks and scarves of the Azzurri, as well as an annual supply of 100% Italian Costa d’Oro oil.

The campaign also includes a 30” instore radio ad which lets the fans of the national team have their say. From one of the most famous stadium chants, ironically revisited, you can only imagine how strong the desire to own the Azzurri’s official holdall is: “Vinceremo, vinceremo, vinceremo un bel borson!”. “We’ill win, we’lll win, we’ll win a great holdall!”.

TVC and radio, with video and audio production by Little Bull Studios and Sample respectively, will be on air until 13 June.