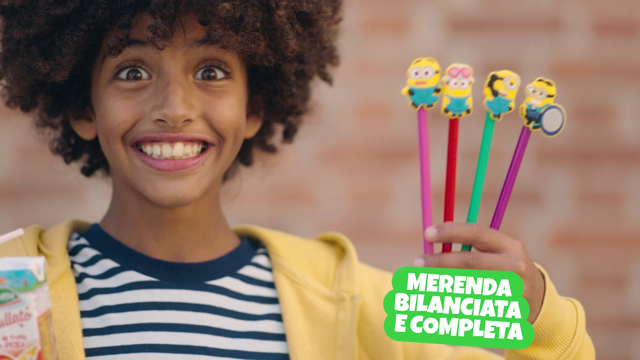 Teneroni and Parmareggio snacks are the TOP! With the Armando Testa Group.

The Armando Testa Group has created the new launch campaign for Teneroni and Parmareggio snacks. Both brands belong to the Bonterre group, leader in the Kids’ snacks sector.

“Top snack”: that’s the concept of the ad, and it also rhymes with the cheery, catchy jingle.

Teneroni snacks and the ABC Parmareggio snack are the “top”, not only because they guarantee a well-balanced supply of energy, but also because they are super fun: in every pack, you’ll find gifts like Minions pencil tops, rubber gadgets to decorate pens and pencils… all to be collected!

And that’s not all, the Premiatissimo Te 2 promotion is back. In addition to the gift pack with the Minions toppers, there’s a competition with a Samsung Galaxy tablet up for grabs every day and lots of Kappa clothing and accessories to win.

The campaign is integrated.  “Top snack” is also online with stories and social videos of 15” and 10″.

For each video, two young friends – just like real influencers – try their hand at unboxing the packages of the Teneroni and Parmareggio snacks, and then embark on ever-changing challenges to the sound of the Minions. A mini format of pure entertainment, describing all the flavour and fun of a truly top snack break in just a few seconds!

The planning on Kids TV and social channels, starting from 3 October.

Life is better together • • #armandotesta #atc