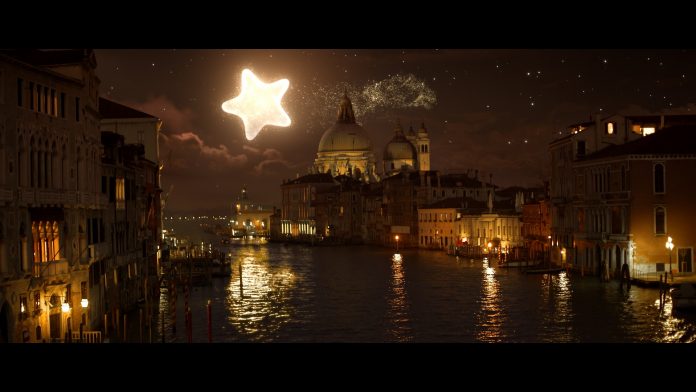 “Can a dream get even better?” After the launch of the new campaign “Sogna, è buonissimo” (“Dream, it’s great), Pan di Stelle returns to TV screens with a new 15” ad dedicated to the new Crema recipe, which today is even more spreadable.

Conceived by the Armando Testa strategic and creative team, in collaboration with the Pan di Stelle marketing team, the film opens against the sky of Venice, the city of dreams par excellence.

The huge star-moon, the icon of the new campaign, is shining magically over the Grand Canal, and to the notes of City of Stars, the soundtrack of the entire campaign, a luminous trail of stardust leads us to the very best dream you could wake up: Crema Pan di Stelle.

The only cream with the magical touch of biscuit grains is already one of the most successful products in the range. And today, thanks to a product innovation that makes it even more spreadable, Crema Pan di Stelle, is more irresistible than ever. This is demonstrated by a delicious spread of the cream on a slice of bread and a little girl rushing off to her breakfast, and she can’t resist dipping her finger into her dad’s slice of bread, to craftily steal a curl of cream. Who hasn’t dreamt of a breakfast like this?

The new film for Crema Pan di Stelle has been on air since Sunday 11 September.  Once again it was directed by Matteo Sironi, with production by BRW Filmland and special effects by Edi. Widespread planning on social media and digital with dedicated pre-rolls support the TV schedule.

“If you have a dream, hold on to it tight” is the message of the Pan di Stelle Manifesto: let’s bet that it’ll apply to the jar of the new extraordinary cream too.