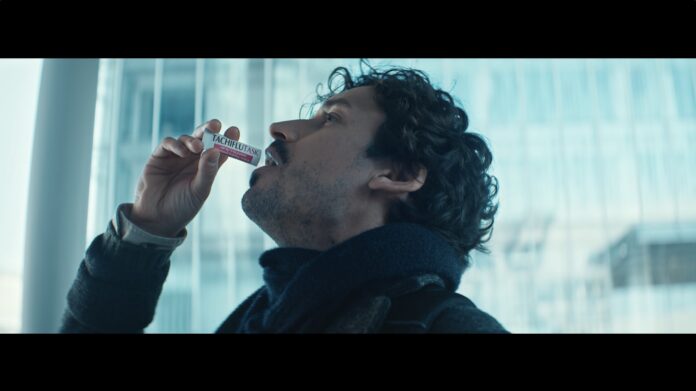 Ecciù-Tachiflu…Task! At easy reach against the symptoms of the flu. Creativity by Armando Testa.

Angelini Pharma has always been committed to treating the symptoms of a cold, and they are now launching a new product on the market in practical sachets which can be taken without water: Tachiflutask.

The creativity is once again by their historic partner Armando Testa, and it has a twofold objective: to reposition a historic brand, which is well-established in consumers’ minds, with its Tachifludec version and to emphasise the novelty of this on-the-go solution. It does this by playing on the similarity between the sound of a sneeze and the name of the product: Ecciù-Tachiflu becomes the common thread uniting all the various pharmaceutical products, first Task and then Dec.

On the one hand the claim a portata di task (within reach of an “atchoo”), brings to mind the name of the new product and on the other it conveys the practicality of having a sachet that you can always carry around in your pocket, so as not to be caught out unprepared when flu symptoms occur.

The launch of Tachiflutask is also an opportunity to capitalize on the brand using a new sound logo at the root of the “Tachiflu” family and common to the range of products, making it memorable and recognizable. And it is also an opportunity for distinct positioning for these products. A different instrumental arrangement and mood depending on the pharmaceutical form will accompany each product.

The creativity for the new launch, in 20″ and 15″ formats, has been on air on main television channels and on the web since November 27th. A more elaborate version with a “tail” dedicated to Tachifludec’s iconic “warm cure” will be added. The campaign was produced by AT Studios and directed by Giorgio Neri.