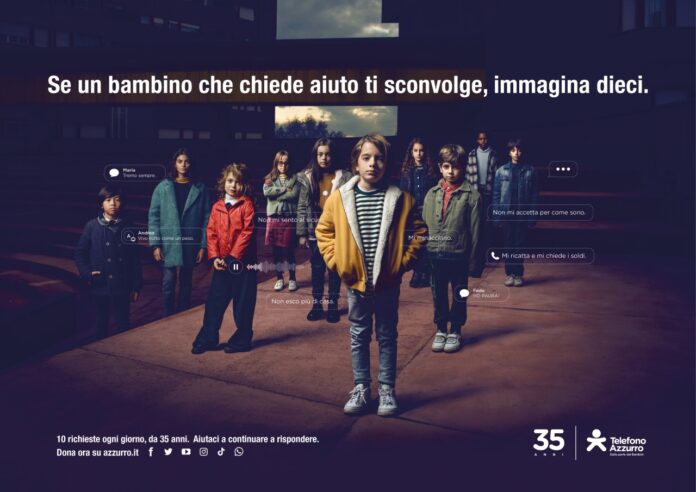 Milan, 30 November 2022 – The corporate campaign “Ten Calls” created by the Armando Testa Group, and running on film, radio and the press tells the story of Telefono Azzurro’s 35 years of activity supporting kids and young people.

The message focuses on Telefono Azzurro’s daily commitment and invites people to reflect on the inevitable emotional difficulties experienced by the people working and responding promptly every day. The number of telephone calls and requests for help on all platforms the non-profit organization actually manages amounts to around 3573 cases in a year. This sizeable number is destined to increase due to the long-term effects of the pandemic.

“Over the years as the Armando Testa agency we have had the privilege of working with Telefono Azzurro on a number of occasions. We know how serious they are, their social outreach and constant commitment over the years. We were looking for a different way to tackle the problem for this campaign. Rather than describe the disadvantage of those who need support, we decided to focus attention on the emotional impact of the people who have to respond to constant pleas for help every day. On how important it is to do that in a sensitive way, to be helpful and listen carefully. These are values that Telefono Azzurro has been putting into action for 35 years” explains Michele Mariani, executive creative director of Armando Testa.

So, the 30” TV commercial features a boy jogging. It looks like a normal workout on a normal Sunday morning, even if, from the very first seconds, the dystopian setting immerses us in a metaphorical narrative. The boy is wearing headphones, listening to music, he’s running along in between buildings, then he climbs the steps of a showground in the outskirts of town when a child suddenly interrupts his run and his music.

We don’t know where he’s come from or what he is doing there, but his question, so simple and direct, strikes the guy and all of us: “Will you help me?”

The adult inevitably feels disoriented and troubled. Exactly as anyone of us would feel in the same situation. And the voice-over message clarifies: “If a child asking for help troubles you, imagine what ten feels like”. At that point the shot widens out and nine other children appear, while the corporate message explains the commitment of Telefono Azzurro: “Ten pleas for help every day for 35 years”.

The press ad also features the key frame of the commercial, with the ten children sitting on steps, an example of a plea for help that the operators receive every day, next to them. The radio ad, on the other hand, is a single plea consisting of ten voices. A mash-up that, in an unsettling way, presents us with the daily commitment of Telefono Azzurro.

“35 years of listening, dialogue and continuous intervention to defend the rights of minors means we have become aware of countless situations of difficulty and serious problems and have understood their needs. 35 years of concrete, professional and sensitive help for children and young people who have been victims of abuse and violence. 35 years at the service of the community taking charge of over 120,000 cases reaching the three lines that Telefono Azzurro currently manages. The numbers and victim impact statement collected by the Telephone Azzurro Listening Centre speak for themselves. Even if the drama of the pandemic, at least at an emergency level, seems to be diminishing and everyone is more concentrated on the post-emergency and getting back to a new normality, children and young people are experiencing more distress. The dramatic data regarding violence and abuse, with a noted increase online, confirms this. We’ve now reached the most complex moment, the period when such problems are no longer the focus of attention in current affairs, but continue to constitute a source of anxiety for young people. We hope that this campaign will raise awareness among institutions, companies and civil society of the urgency of specific interventions to support children so that our organisation can continue listening” said Professor Ernesto Caffo, President of Telefono Azzurro

Regarding abuse, in the first ten months of 2022, Telefono Azzurro, by way of the 114 Childhood Emergency Service and the 19696 Listening and Consultancy Service, actually handled 231 cases relating to offline and online abuse and exploitation,  an average of over 23 cases handled per month. In detail, there were 180 related to offline (mainly touching and harassment), while 95 related to the online, making a total of 275. Each individual case handled can actually involve a number of complaints related to both offline and online abuse and exploitation and, likewise, every single child helped may have been involved in situations of prejudice both offline and online.

In line with the historical data of the Foundation, the identikit of the child victim of offline sexual abuse and exploitation is predominantly female, in the 11-14 age group (pre-adolescents) and victim of abuse within the family; the scenario changes in the case of online sexual abuse and exploitation, when the victims remain predominantly female, but of a higher age group, i.e. adolescents over 14 and typically victims of strangers.

With executive creative direction from Michele Mariani, the creative directors Federico Bonenti, copy, and Andrea Lantelme, art, created the campaign for Armando Testa. The production company was AT Studios and director Maria Guidone. The press campaign was created by the photographer Marco Pignatelli.

The radio and online TV ads were created by Sample Milano, with the corporate voice from Tamara Fagnocchi.

The Armando Testa agency and all the professionals involved worked pro bono.

Telefono Azzurro’s goal in this project was to underline the value of silence to encourage dialogue between generations, inviting internet natives to lower the background noise surrounding us every day. Some influencers even changed from creators to listeners for a few minutes, sharing silent content and inviting their followers to make this action, as simple as it is powerful, become viral.

Share
Facebook
Twitter
WhatsApp
Linkedin
Email
Back
Print
Previous articleEcciù-Tachiflu…Task! At easy reach against the symptoms of the flu. Creativity by Armando Testa.
Next articleRiso Gallo and Armando Testa present the new Basmati line from sustainable agriculture: a rice to love grain after grain.