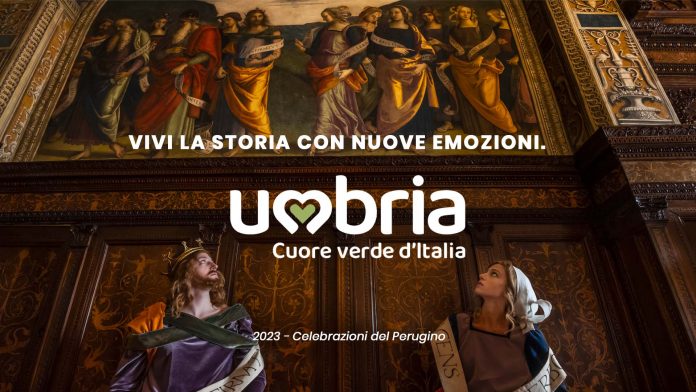 The new promotional campaign for winter tourism in the region of Umbria, created by Armando Testa has been on air since 13 November

After 500 years Salomone and Eritrea “escape” from the fresco by Perugino, “Eterno tra Angeli, Profeti e Sibille”, conserved in the Collegio del Cambio in Perugia. Perugia’s Winter colours and flavours help us to enjoy the fun of their elopement:

there’s poetry, culture, refinement and charm in the original creative idea developed by the Armando Testa agency for the new promotional campaign for winter tourism in the Region of Umbria, airing from 13 November until the end of December on TV, in the press, radio and web.

The creative idea draws inspiration from the celebrations for the 500th anniversary of Perugino’s death, one of the Master’s most famous works features at the very heart of the campaign: The Prophet and the Sibyl have secretly escaped from the fresco that adorns the audience hall of the Collegio del Cambio in the capital of Umbria. Like normal contemporary tourists, they wander around the villages and the natural landscape of the Cuore Verde d’Italia until dawn. But their gaze is mesmerised as they rediscover a profoundly changed world, yet one which has always appreciated the intertwining of the “old” and the “new”, tradition and innovation.

After a night of enjoyment and discoveries, savouring flavours and experiencing all the emotions that a trip to Umbria can give, the two “art-house” testimonials of the campaign return to their places in the fresco, while the concerned yet knowing guard looks on in disbelief.

While witnessing this harmless and amusing escapade, the viewer gets a glimpse of the region, and has the time to appreciate the cities of art, music, cuisine and nature. A voice-over tells us that “in Umbria you can experience history with new emotions”.

The payoff “Umbria. Cuore verde d’Italia”, gives a perfect summary of the identity of the region, and closes the 4 commercials, produced in 30″ format.  The final part features images of different areas to show the whole of the Umbrian landscape.

Produced by the Armando Testa Studios and directed by Federico Brugia; media strategy by The Gate Communication.

A preview of the video was presented to representatives from trade associations, during which, Councillor responsible for Tourism in the Region of Umbria, Paola Agabiti, highlighted the decision to spread “both national and international tourism promotional campaigns for the area, throughout the whole year avoiding a concentration only in the summer and autumn period”.

With that goal in mind, as well as the video airing for three weeks from 13 November, other “windows” dedicated to Umbria will be included in a number of television programmes, so ensuring coverage until March and April when the new campaigns will be launched.

The key event bridging 2022 and 2023 is “L’anno che verrà”, the programme scheduled for prime time on 31 December live on Rai 1, hosted by Amadeus features musical guests and showbiz celebrities.

As already mentioned during the official announcement, the event offers a unique opportunity to promote the entire region.  It will be produced in partnership with the Region of Umbria, which expressed great enthusiasm and offered support, and in collaboration with the Municipality of Perugia.

Share
Facebook
Twitter
WhatsApp
Linkedin
Email
Back
Print
Previous articleArmando Testa and Yamaha Motor Europe together at Eicma and On The Roads Of Life
Next articleFondazione Rava sets off a chain of solidarity together with Armando Testa and Martina Colombari.