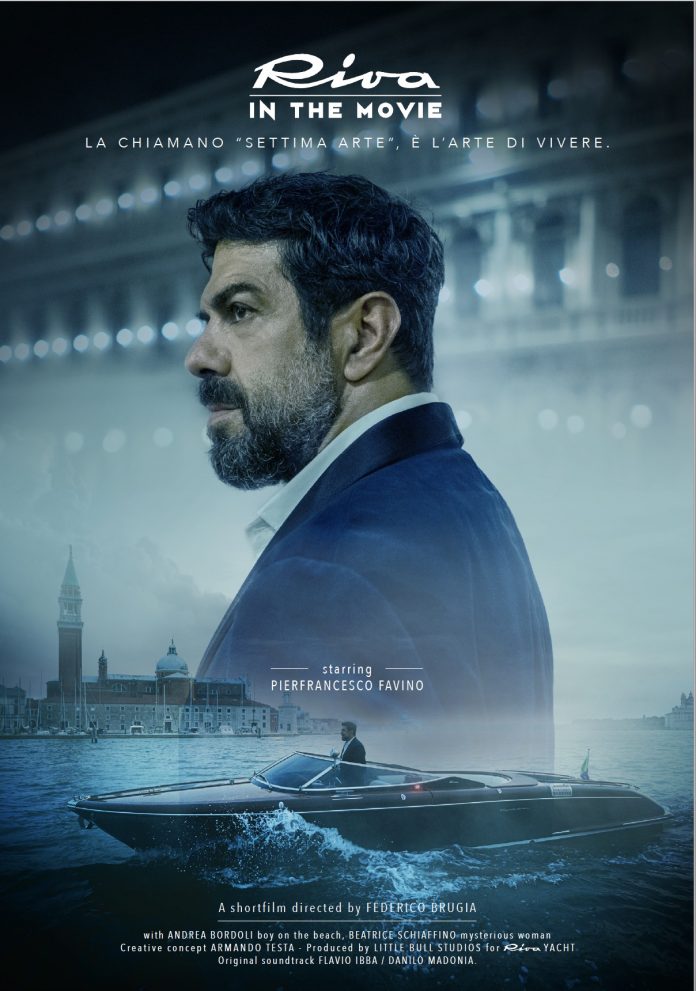 RIVA AND ARMANDO TESTA TOGETHER TO CELEBRATE CINEMA WITH PIERFRANCESCO FAVINO

“Riva in the Movie” is the title of a short which celebrates the enduring link that ties the Riva brand, an Italian excellence from the Ferretti group and the seventh art.

The film was conceived by the Armando Testa agency and produced by Little Bull Studios, directed by Federico Brugia with photography by Luca Esposito. It stars Pierfrancesco Favino, one of the most talented and internationally admired Italian actors, winner of the Nastro d’Argento, David di Donatello 2020 and member of the Academy. On board an iconic Acquariva, Favino crosses a silent and spectacular Venice, accompanied only by his own thoughts in a dreamlike and emotional journey.

Riva itself and its relationship with cinema over every period is the real co-star of the short. Riva boats, both the iconic mahogany ones and contemporary ones have featured on the silver screen all over the world for more than seventy years: from the most famous blockbusters to great Italian successes.

The project is a tribute to cinema, in the city of cinema, an anthem to its amazing imaginative power, an invitation to start off again and to turn the spotlights on again and believe in dreams.

“Celebrating cinema with the wonderful Riva boats, the stars of so many films thanks to which Made in Italy style and creative genius have gained a worldwide reputation: that’s what inspired us to make Riva in the Movie” – commented Avvocato Alberto Galassi, CEO of the Ferretti Group – “an art house short dedicated to those to believe in the magical power of the imagination and talent.”

Marco Testa chairman of the Armando Testa Group reiterates – “I am proud that my agency has contributed to this cultural enterprise and to relaunch Italy and one of the Italian excellences in such a particular moment. Imagination and creativity are precious fuel of Made in Italy which need to be supported and encouraged more than ever at this time.”

The short was presented during the 77th International Venice Film Festival and a prestigious book has also been produced: 300 pages, 39 films with original posters and hundreds of great scenes and back stage shots, 77 actresses and 110 actors.

The original soundtrack accompanying the film was created by Red Rose Productions and composed by Flavio Ibba and Danilo Madonia, its finale pays tribute to Nino Rota, the composer who made so many of Fellini films unforgettable.

Copywriter Sara Greco and Art Director Barbara Ghiotti from Armando Testa worked on the project with the Executive Creative Direction of Michele Mariani.

The film can be viewed on all Riva Yacht brand social channels and on their official website:https://www.youtube.com/watch?v=Gd_LnzgUdZE&list=PLi42k0hWDFNjoZUj9d_UZsnRcTrUQXZAY&index=11

Share
Facebook
Twitter
WhatsApp
Linkedin
Email
Back
Print
Previous articleTAKE OFF YOUR SWEATER WITH THE NEW AD FOR LINES SPECIALIST FROM ARMANDO TESTA
Next articleCREMA PAN DI STELLE IS BACK ON TV WITH ARMANDO TESTA, TO REVEAL A SECRET THAT IS TWICE AS GOOD