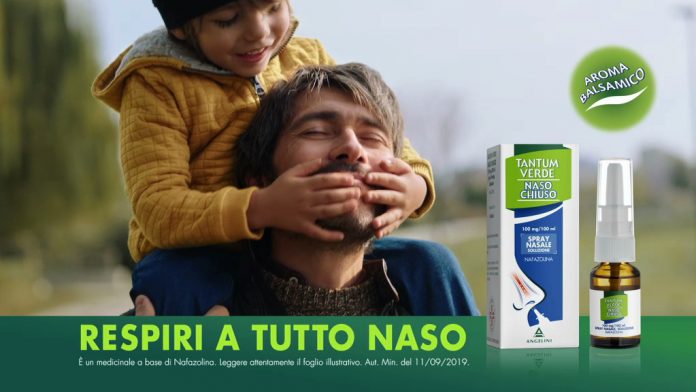 Tantum Verde is a well-known brand of products from the Angelini Group to treat mouth and throat disorders. The launch of new Tantum Verde Naso Chiuso sees it entering the world of nasal decongestants for the first time, with creativity by Armando Testa.
The campaign is on air in cuts of 20 “and 15” on TV and the web.

The idea is to represent the discomfort caused by the sense of apnoea when you have a stuffy nose with a symbolic red pincer “nose pad”. The pincer can always be seen on the protagonist’s nose. He is a smart, friendly engineer, and the pincer means he has trouble breathing and has to keep his mouth open all day long while at work, right up to the evening when he goes to bed.

Thanks to Tantum Verde Naso Chiuso the problem can soon be solved. This is demonstrated by the technological demo that mixes some features of the pack (profile of a nose and the spray) with 3D animation to highlight how effective and rapid Tantum Verde Naso Chiuso is in decongesting nasal passages. So the irritating pincer disappears from his nose.

We then see the protagonist relaxing in a public park with his young son on his shoulders. Even if the kid’s little hands are covering up his mouth in a playful way, he is still able to breath easily. Because with Tantum Verde Naso Chiuso you breathe very well through your nose!With creative direction from Piero Reinerio, art directors Enrico Ambroggi and Tina Salvato and copywriter Chiara Demichelis worked on this project. Client service: Raffaele Reinerio, Roberto Rosingana. Production company Filmaster.

Share
Facebook
Twitter
WhatsApp
Linkedin
Email
Back
Print
Previous articleLINES HAS CHOSEN ‘THE COLLEGE’ FOR THE NEW FORMAT OF BRANDED ENTERTAINMENT WITH CREATIVITY BY ARMANDO TESTA
Next articleARMANDO TESTA AND YAMAHA GET THEIR ENGINES RUNNING AT EICMA 2019.